Dr. Cristopher John Greatrex lived in Eagle House from c.1840 to c.1855 with his second wife Catharine Augusta Burnell and their six children.  The property was built as a workhouse but the reforms of The Poor Law meant that by 1840, all of Eagle House’s residents had been transferred to the workhouse in Stone.  Doctor Greatrex purchased the property after the workhouse closed.  When he sold the building it became a girl’s boarding school.

Doctor Greatrex and the other members of his family who lived at Eagle House are interesting individuals as well as being important to the history of the house. Their lives have been researched using newspaper archives and other publicly available records.  If you know anything more about the Greatrex family, or are a relation, we would love to hear from you. 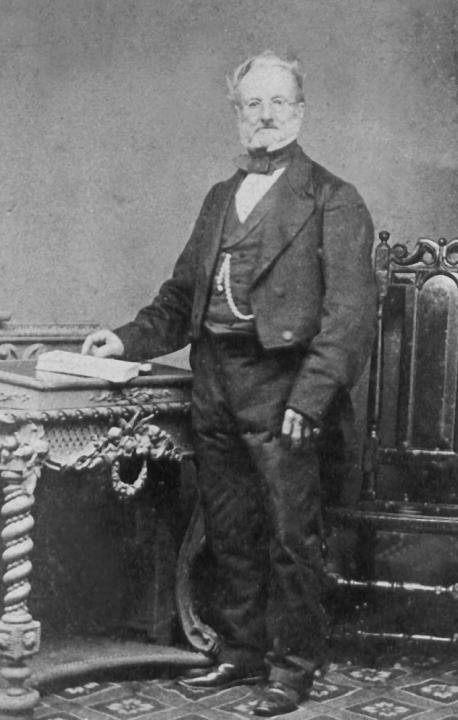 Christopher was born on 26 May 1792 in Birmingham to Charles and Susanna.  He commenced his Medical Studies in 1806 at Stafford General Infirmary, with Charles Salt. He completed them in the London hospital under Sir William Blizzard in 1810.  He also attended the lectures of Dr. Clutterbuck at his private class-rooms.

On completing his studies, he practised in Bath and Birmingham before moving to Eccleshall in 1815.  Dr. Greatrex initially lived on the corner of Stafford Street and Stone Road in Eccleshall (plot 480 on the 1839 Tithe Records).

Christopher married Anna Catherina Warren on 6th April 1815 at Eccleshall’s Holy Trinity church.  They had three sons and three daughters together before, at the age of 29, Anna passed away in 1824. She is buried in the Holy Trinity Graveyard in Eccleshall.

On the 14 January 1826, Dr. Greatrex married Catharine Augusta Burnell at St. Paul’s in Bedford.  Catharine and Christopher had 5 sons and 2 daughters together.

In around 1840, shortly after the birth of his youngest child, Dr. Greatrex purchased Eagle House.  The Census of 1841 records Catharine and Christopher living at Eagle House with five of their seven children (recorded as ‘part of Eccleshall going south’); Letitia, Christiana, Alfred, Frederick and Adolphus.  Their eldest child, Augustus, was at Christ’s Hospital boarding school in Horsham at this time.  Richard is also at Christ’s Hospital boarding school, on the Hertford campus.  Christopher, one of Dr. Greatrex’s children from his first marriage is also listed as living at Eagle House.

The 1851 Census lists Catharine and Christopher living at Eagle House, this time with four of their children; Letitia, Christiana, Alfred, Frederick.

Dr. Greatrex put Eagle House up for sale in 1853 and the last record of him having lived at the property is in the UK & Ireland, Medical Directories of 1855.  After selling Eagle House, Dr. Greatrex moved to 79 High Street in the centre of Eccleshall where he lived until the final weeks of his life.

Dr. Greatrex practiced for sixty-five years and carried on a large practice in Eccleshall to within a fortnight of his death on 8 May 1880. He passed away at Lawton Villa, the home of his son Adolphus, in Church Lawton, Cheshire.

Shortly after his death, the passing of Dr. Greatrex was noted at a meeting of the Stone Board of Guardians. He had been a doctor for the Stone poor Law Union for many years and he was described as ‘a very good servant to the union and a very good friend to the poor’. 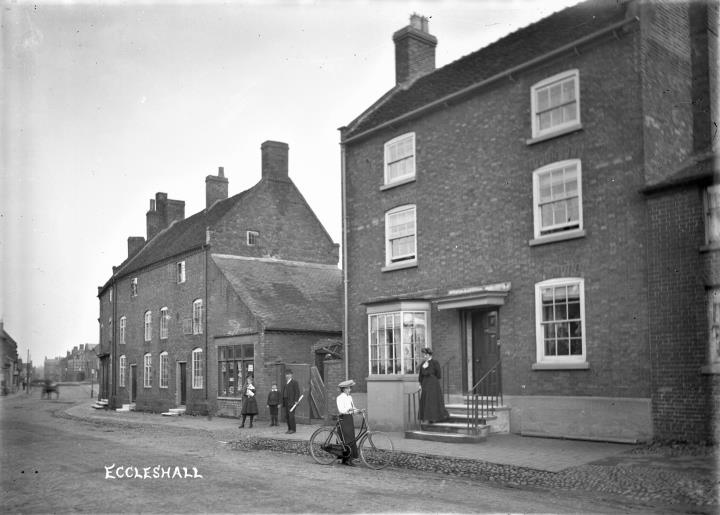 A woman standing on the steps of 79 High street. The building was demolished to make way for Pershall Court retirement housing in 1968.

Catharine Augusta Burnell was born 5 July 1801 in Blackheath, Kent to Thomas and Letticia.  She married Christopher John Greatrex on 14 January 1826 at St. Paul’s in Bedford. They had seven children.

Catharine was a keen dancer and was the patroness of the Annual Eccleshall ball which was held at the Royal Oak in the centre of Eccleshall.

She died on 11 December 1883 in Staffordshire having lived a long life of 82 years and is buried at Eccleshall’s Holy Trinity church.

Augustus Brabbins Webb Greatrex was the first child of Christopher and Catherine.  He was born in 1827 in Eccleshall.

When his father Christopher purchased Eagle House in around 1840, Augustus was 13 years old and was studying at Christ’s Hospital boarding school in Horsham.  Therefore, it is unlikely that Augustus spent the majority of his time at Eagle House.

Augustus followed in his father’s footsteps and studied to become a doctor.  In 1851 he worked as an assistant surgeon to William Marsden in Skipton, Yorkshire.  Augustus is also living with William and William’s daughter, Mary, who he would later go in to marry.

On 29 July 1852 Augustus passed his exams in science and the practice of medicine at Apothecaries Hall and received his certificate to practice.  He was admitted as a member of the Royal College of Surgeons on 2 February 1855.

Augustus married Mary Marsden on 28 June 1855 at Christ Church, Skipton in Craven, Yorkshire.  Presumably they first met while living together when Augustus was studying.  They lived together at 23 Holborn-Hill in London.  Augustus and Mary had four children together; Beatrice, Edith, Marsden and an unnamed son who was stillborn.  Their youngest son, Marsden, was born on 29 April 1862 and Mary passed away shortly afterwards on 23 June 1862.

Augustus was a Steward of the Infant Orphan Asylum in Wanstead and was appointed Surgeon to the Western City Dispensary in 1856.

On 7 July 1864, Augustus married his second wife Emily Beatrice Farntlevey at St Saviour’s Church, South Hampstead, Camden.  They lived together at Holborn-Hill in London until Augustus’ death on 2 November 1905.

In the memoirs of the novelist Samuel Butler, best known for the satirical utopian novel Erewhon, he recounts a discussion when Dr. Augustus Greatrex was tending to him.  Augustus noted that he had known Samuel’s grandfather, Dr Samuel Butler, the Bishop of Lichfield between 1836 and 1839.  The Bishop lived at Eccleshall Castle and was the land owner of Eagle House before Augustus’ father, Christopher, purchased the property.  The Bishop had a nomination for Christ’s Hospital boarding school which he had intended to use for a member of his own family. However, having been appointed a bishop, he offered it to Christopher Greatrex for his son Augustus.  An anecdote was also shared about Augustus’ second wife Mary. It is said that “she was a member of an old Yorkshire family, people with ideas of solid comfort and good living, and famous for their cellar. The first words that Mrs. Greatrex uttered as a child were not “Mama” or “Papa” or anything of that kind but “Chateau Margaux”.

The 1841 Census, taken shortly after their father purchased the building, records Letitia and Christiana both living at Eagle House.  They both live in Eagle house until its sale in around 1853 when they move to 79 High Street until the death of their mother in 1883.

After the death of her mother, Letitia spends some time living in Cheshire working as a housekeeper.  The sisters later live together in Cheshire before moving to Southport. Christiana passes away in 1919 at the age of 88, followed a year later by Letitia aged 92.

Richard John Greatrex, the fourth child of Christopher and Catherine, was born in Eccleshall in 1832.

When Eagle House was purchased by his father Christopher, Richard was studying at Christ’s Hospital boarding school.  Therefore, it is unlikely that he spent the majority of his time at Eagle House.

Following his studies at Christ’s Hospital, Richard was a medical assistant to William Crossley Irwin.  It seems that he did not continue his medical studies and, at some point between 1851 and 1860 he moved to India.  On 10 September 1860 he married Sarah Hayward in Bangalore.  Sarah and Richard had three children in India, Sarah Catherine (in 1861), Augusta Burnell (in 1863) and Richard John (1866) then returned to the UK at some point before 1868.

Alfred Brunell Greatrex was the fifth child of Christopher and Catherine.  He was born in 1835 in Eccleshall.

On 13 March 1861, Alfred married Elizabeth Bowker at St Mary Parish Church, Eccles in Lancashire.  They had eight children together.   Alfred and Elizabeth lived together with their family in various places around Lancashire before moving to Newcastle-on-Tyne in their later years.

Alfred worked as a grocer before becoming an RSPCA Inspector.

Alfred passed away at the Newcastle-on-Tyne Infirmary, on 1 October 1901 at the age of 66.

Frederick Greatrex was the sixth child of Christopher and Catherine.  He was born in 1836 in Eccleshall.

The 1841 and 1851 Census records Frederick living at Eagle House.  He then moved to 79 High Street in around 1855 with his Mother and Father.

Frederick was well respected in Eccleshall and, in 1860, he became the Secretary to Eccleshall library. Two years later, in 1862, Frederick passed the Trinity Term Law Examinations and was sworn in and admitted as an attorney of her Majesty’s superior courts in Westminster.

On 29 October 1867 Frederick married Sarah Jean Pilling at St. Mary’s church in Stafford and they go on to have four children.  They live together at 43 Foregate street in Stafford, a building referred to as ‘The Limes’.

Frederick became a Staffordshire Magistrate in 1869 and was appointed a Commissioner to administer oaths in Chancery. He was very active in the local community being vice-chair of the Stafford Board of guardians and a member of the Stafford School Board.

He was appointed to be an Alderman and twice held the office of Mayor of Stafford; in 1884 and 1896.

Frederick was also a talented musician who played the Cornet-a-piston. He died on 24 November 1909 in Stafford at the age of 73. 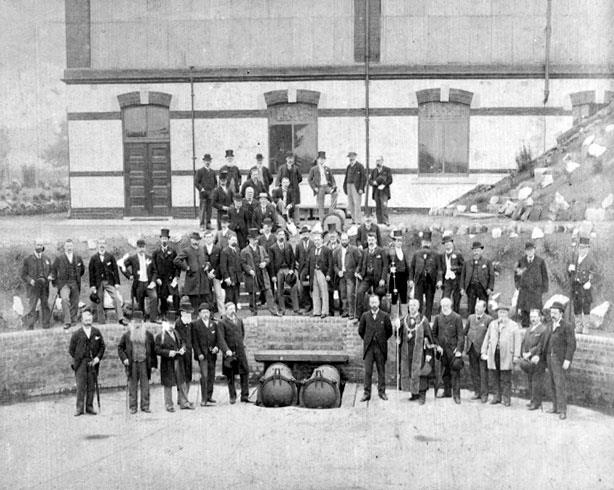 Adolphus Burnell Greatrex was the seventh, and youngest, child of Christopher and Catherine.  He was born in 1840 in Eccleshall.

The 1841 and 1851 Census records Adolphus living at Eagle House with his Mother and Father.

Like his father, Adolphus was drawn towards the medical profession and in 1862 he passed the final examinations at Apolhecaries’ Hall and received his diploma and certificate to practice medicine. On the 19 December of the same year, he received his degree as a doctor of medicine from St. Andrews University.

On the 6 December 1865 Adolphus married Elizabeth (Lizzie) King Ronaldson at the Kidsgrove  Parish Church.  Lizzie was from Edinburgh so the couple presumably met while Adolphus was studying at St. Andrews.

On 13 December 1866 there was an explosion at the Talke-o’-th’-hill colliery.  Dr Greatrex was one of the first doctors at the scene and, together with Doctors Bruce, Salt, and Barnes, was praised for his efforts in tending to the wounded. At the time of the explosion there were 150 men in the mine, 91 of them perished.  It was reported that, thanks to the efforts of the medics, only one of the miners that was brought out alive later succumbed to their injuries.

Adolphus and Lizzie’s only child, James Burnell Greatrex, was born in 1867 and also later went on to become a Doctor.

Adolphus was a public vaccinator for 25 years and medical officer for the Kidsgrove district of the Wolstanton and Burslem Board of Guardians. In 1908 he was appointed to the Commission of the Peace for the County of Cheshire.

On 25 February 1912 Lizzie, Doctor Greatrex’s wife of 47 years, passed away.  She had been ill for about ten years and during the final years of her life was confined to the house. Adolphus died almost a year later on 30 Jun 1913.

The 1841 Census records Christopher Butler living at Eagle House with his father, Step Mother and step-siblings.

In 1849 Christopher Butler married Ellen Farnworth and they lived together in Prestwich, Manchester where Christopher worked as a Grocer and Ellen was a dressmaker.  They have five children together.

Other children of Cristopher John Greatrex and Anna Catherina Warren

Christopher John Greatrex and Anna Warren had six children together before Anna prematurely passed away, in 1824, at the age of 29.  As discussed above, only Christopher Butler Greatrex ever lived at Eagle House.  Their other children were Anna, Charles (railway superintendent), Susanna, Catharine and James (watchmaker).